Development of an evidence-based climate change adaptation toolkit for Uttarakhand 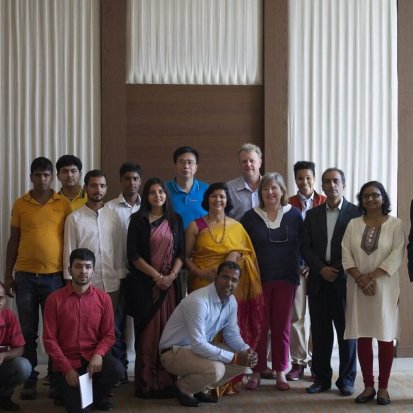 Background: The Ramgarh Basin lies in the foothills of the Himalaya’s and is known as the fruit bowl of India. Climatic changes in the past 30 years have seen more frequent extreme weather events including severe droughts, flash flooding, hail storms and cloud-bursts that have resulted in lower yields. These weather events, alongside a general decrease in the total rain-days, are placing pressure on local water and agricultural systems.

In March 2016, a Sustineo team travelled to the Ramgarh Basin to implement Phase II of the climate change adaptation toolkit designed to improve community resilience.

Approach: Our team conducted a risk and vulnerability assessment of the region based on core climate data produced by Sustineo’s partner, the Monsoon Asia Integrated Regional Study (MAIRS), and community perceptions. The risk assessment identified key fragile systems and what climatic changes were likely to affect them. The Sustineo team worked with local stakeholders to identify vulnerable areas, relevant actors, and their adaptive capacity. These assessments included impacts from climate change on water resources, natural disasters, agricultural and food systems, rural livelihood, trends of rural out-migration and gender issues.

The project applied the Asian Cities Climate Change Resilience Network Process (ACCCRNP) approach that produces qualitative data through workshops based on stakeholder and community perceptions. While this approach was initially developed for building urban resilience, our team adapted its methodology to suit a rural context. Throughout the project, Sustineo engaged closely with local partners, ICLEI, and personnel from Nainital University to complete the research, analysis, and workshops.

Outcome: With Sustineo’s facilitation, the stakeholder group and workshop team successfully produced risk and vulnerability assessments for the Basin. The majority of the workshop participants endorsed the climatic patterns indicated by the MAIRS’ climate projection. The workshop discussions revealed that the most vulnerable systems were the availability and supply of water for drinking and irrigation, road connectivity, community health, rural economy, and forest resources.

The outcomes of the Phase II workshop were collated with data from Phase I to produce a progress report. Key data was analysed and used for Phase III and IV in 2017 hosted in New Delhi. Key findings, solutions, and recommendations were discussed with government and community stakeholders.